A cookie is information stored on your computer by a website you visit. Cookies often store your settings for a website, such as your preferred language or location. This allows the site to present you with information customized to fit your needs. As per the GDPR law, companies need to get your explicit approval to collect your data. Some of these cookies are ‘strictly necessary’ to provide the basic functions of the website and can not be turned off, while others if present, have the option of being turned off. Learn more about our Privacy and Cookie policies. These can be managed also from our cookie policy page.

IE10 and below are not supported. 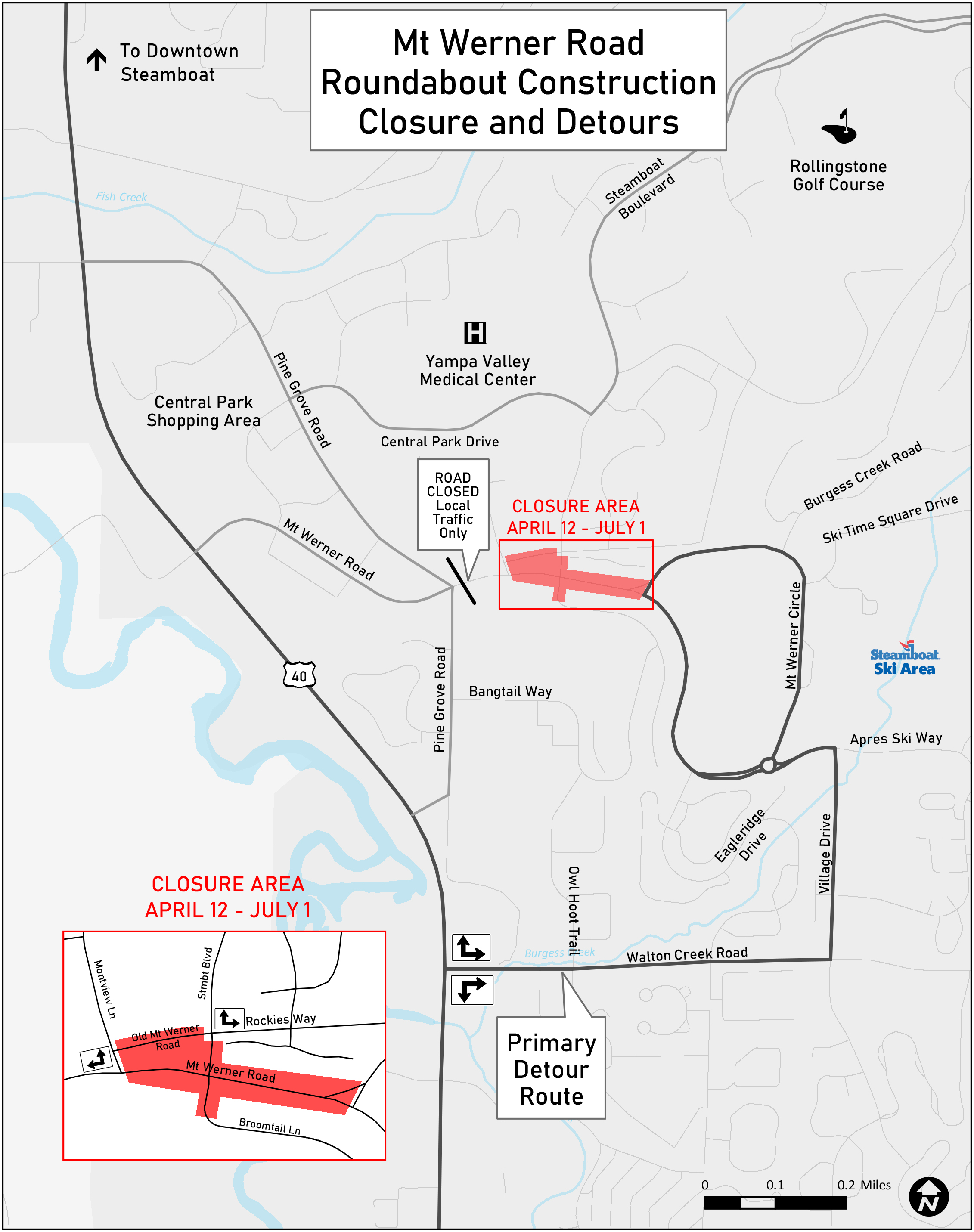 STEAMBOAT SPRINGS, COLORADO-April 1, 2021-In under two weeks, the city is set to begin constructing a new roundabout at the intersection of Steamboat Blvd and Mt. Werner Road and implement closures and detours following the end of the ski season.

“This intersection has been on the radar for some time and this project addresses significant safety improvements for both motorists and pedestrians,” said Project Manager and Public Works Engineer Danny Paul. “While we’ll have to change how we travel temporarily, the benefits of this project will be felt immediately when completed and well into the future.”

Having worked on three roundabouts in Steamboat Springs including the most recent one at Ski Time Square, Duckels Construction will serve as the general contractor and TRC Engineers as the construction project manager/inspector. The project is estimated to be finished by late October.

Individuals traveling along Mt. Werner Rd will see project signage going up over the coming weeks. The road closure, which will run from April 12 through July 1, will shut Mt. Werner Rd off from all traffic between Montview Lane and Mt. Werner Circle and see partial closures on Old Mt. Werner Road and Broomtail Lane. Steamboat Springs Transit will adjust the Red and Green routes this summer due to numerous planned projects including this one. In addition, the Steamboat Ski & Resort Corp will be completing mountain projects during the same time which will add trucking traffic along the detour route.

Motorists traveling to/from the mountain village will need to use Highway 40 to Walton Creek Road to Village Drive. Motorists accessing from north of the closure will be required to use Central Park Drive to get around the project area. Two-way traffic on Mt. Werner will return before the July 4 holiday weekend. The public should expect delays during this time and are encouraged to use alternate methods of transportation or plan ahead by adjusting your schedule or taking alternate routes to get around the closure on Mt. Werner Road.

“Closing the area during the initial phase allows the project to be completed in a single construction season instead of spanning two summers,” continued Paul. “This is a substantial project in terms of size and volume of work required and we’re doing everything possible to be efficient and limit disruptions.”

The final product will see two lanes westbound (toward US40) and one lane eastbound (headed to ski mountain) that can be expanded to two lanes in the future when volumes warrant. The roundabout has been appropriately sized to perform well even during Steamboat’s busiest winter periods. In addition, an existing drainage pipe to accommodate the 100-year flood will be installed. New sidewalks, formalizing existing bus stops, landscaping beautification, street and pedestrian lighting are part of the overall scope.

The city will host bi-weekly public information meetings to share updates, with the first one scheduled virtually for Friday, April 9 at 10am. Essential materials, including site plan, description, FAQs, detour & closure maps, contacts, and public meeting notices can be found at EngageSteamboat.net/Roundabout. Also, a Public Hotline for questions, comments or concerns is available at 970.871.8291 or individuals can email the project manager directly.